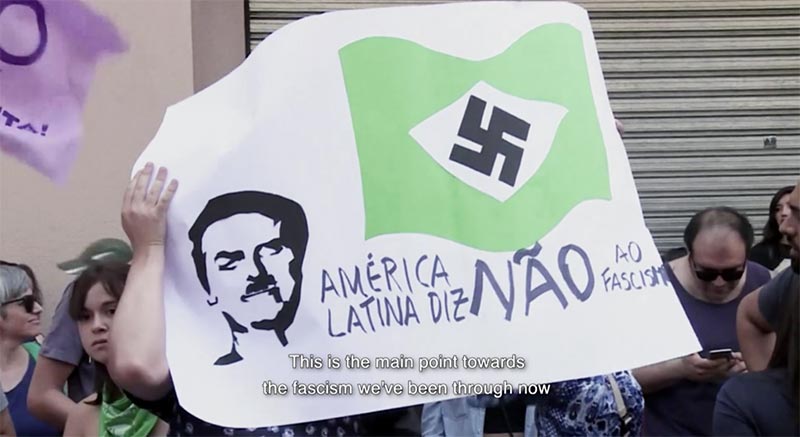 16 Jul Our Flag Will Never Be Red, Directed by Pablo Lopez Guelli: The Fight Against Corruption in Brazilian Media

Posted at 10:14h in Film Spotlight by vance-admin 0 Comments

“Our flag will never be red,” directed by Pablo Lopez Guelli, delves into the circulation and control over Brazil’s media. About ninety percent of Brazilian media is controlled solely by six powerful right-winged families like UOL and TV Globo’s. This film explores how this unjust characteristic proved to be quite powerful in swaying momentous socio-political events in the country’s history. Pablo’s presence in Brazil during the 2013 protests against corruption, police brutality, and poor public transportation services ignited his interest in the country’s media behavior. Since the protests of 2013, Brazilian government’s actions against journalists have grown evermore corrupt; to the point of being considered as a Fascist regime by its people.

Pablo’s film follows the stories and opinions of the incredibly talented people in the world of Brazilian media that are fighting for justice against such corruption, including Gleen Greenwald. The government’s response to Greenwald’s work at The Intercept, which opposes the fabricated news stories of the larger fascist news companies, underscores the severity of how corrupted the media coverage of the country is. At this point in time, he and his work are now denounced and could be facing possible jailtime. It is Pablo’s hope, with the help of “Our flag will never be red,” to reach across boundaries and shed light upon this corruption and end the newly emerging fascist regime.

What’s fantastic about this film is that it is spoken completely in Portuguese and dubbed with English subtitles. The cinematography is also incredibly well done and encapsulates the liveliness and passion of the people of Brazil.  Pablo’s artistic eye combined with his determination for change create for an overall inspiring and fulfilling experience.

“You have a huge threat to democracy when Bolsonaro says: “I won’t accept the results of the election”

“In Brazil, for any relevant subject of public life, you will find in almost all cases the same position being defended by all the mainstream media.”

“In the case of TV in Brazil, we have a monopoly scenario”

“If you want to talk to someone who is Brazil’s owner, that is TV Globo.”