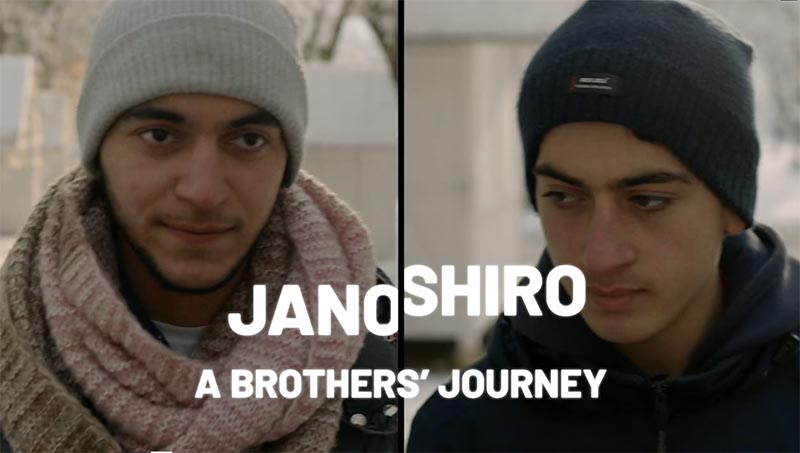 Posted at 15:07h in Film Spotlight by vance-admin 0 Comments

How far would you go to start a better and safer life for your family?

The answer for brothers Jano and Shiro is thousands of miles, across snow-covered mountains, minefields and dangerous borders, traveling most of the way on foot.

A 2021 Free Speech Film Award finalist, Jano & Shiro, a Brothers’ Journey follows two Syrian brothers on their journey from Istanbul, Turkey to seek asylum in the Netherlands. Even as they are separated by borders, distance and an asylum policy that houses Shiro, a 15-year-old minor apart from 18-year-old Jano, the hope between them for a better and safer life never dies.

American INSIGHT had the opportunity to speak with the film’s directors, Eefje Blankevoort and Els van Driel of the Netherlands. The following Q&A details more on their journalistic backgrounds and the filmmaking process: 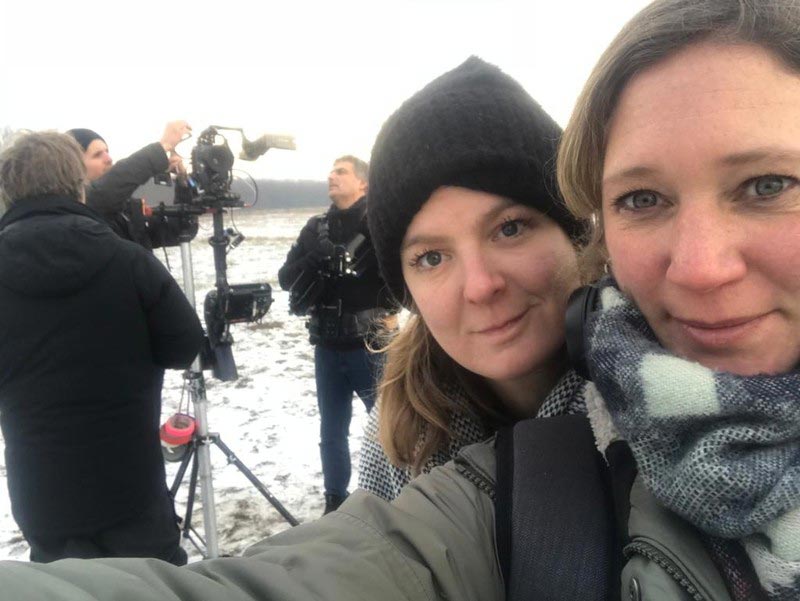 Free Speech Film Festival: Please tell us about yourself. What interested you in filmmaking?

Eefje Blankevoort and Els van Driel: We (Eefje and Els) met each other during our student days. We both worked in a film theater entirely run by students. We became friends and we both became journalists and documentary makers. It was in 2014 when we decided to work together on a project about our national asylum policies. That’s where our mutual interest began in asylum and migration topics. Filmmaking for us is a very strong way to move the audience into a radical perspective change. To show unseen worlds. To tell unheard stories in a way that directly touches peoples’ hearts and minds. We believe in stories that matter. And if seen by the right people, through film you can actually accomplish change.

FSFF: How did you meet brothers Jano and Shiro and what was the filming process like for the film?

EB and EvD: We met them in Bosnia – Herzegovina, in a makeshift camp under terrible conditions. They were stuck in the wintertime at the border with Croatia. Jano showed us that he had filmed his own journey on his phone. He had done this because he thought no one would believe that he had gone through all of this once he would arrive to his country of destination. For us it was remarkable to see the immense foot journey he had already undertaken and we decided to collaborate together on the film. So we filmed them during the days we could be with them and once they would have to cross borders they would film themselves. For them it was also important that it was documented. 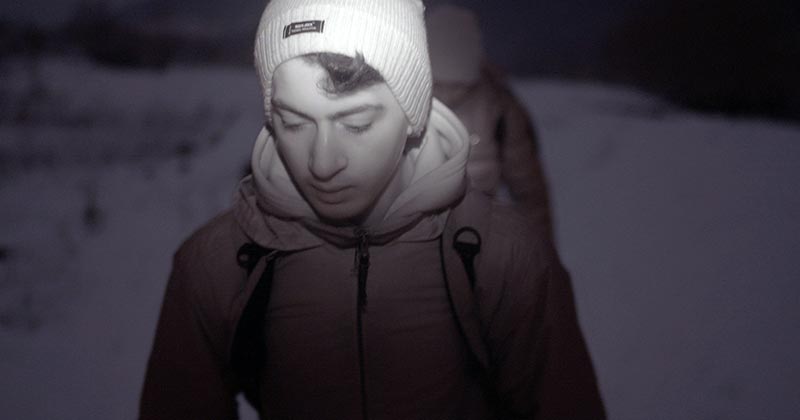 Still from Jano & Shiro, a Brothers’ Journey, as the brothers travel at night.
Photo courtesy of Eefje Blankevoort and Els van Driel.

FSFF: Did you know much about the asylum-seeking process prior to making this film? How has your view changed since following Jano and Shiro’s story?

EB and EvD: We knew already what kind of system they would arrive to once they came to the Netherlands, as we had already made a big project about our national asylum policies (www.asielzoekmachine.nl) as mentioned above. So yes, we knew a lot. But what struck us again was that the human size was completely gone also in the story of these two brothers. How can you seperate them because the one is 18+ and the other a minor? Is this the right criterium?

FSFF: What kind of change do you hope your film will bring about and inspire in its audiences?

EB and EvD: We hope that people will think about this question: can we have a more human size in asylum policies. And how can we help young people like Jano and Shiro who arrive here? What are their needs and what can you do to get them integrated and confident in this new society?

FSFF: What would you say to a person who disagrees with your stance and the messages in this film?

EB and EvD: I would say: talk with people that are on the move. Make sure you hear and see them. And then we will discuss policies again. These people have a story and it could be you someday, having to flee to another country.

FSFF: I loved your decision to utilize a split screen at times throughout the film – what inspired you to do so?

EB and EvD: We thought it was a strong visual way to show simultaneity. It just popped into our minds. 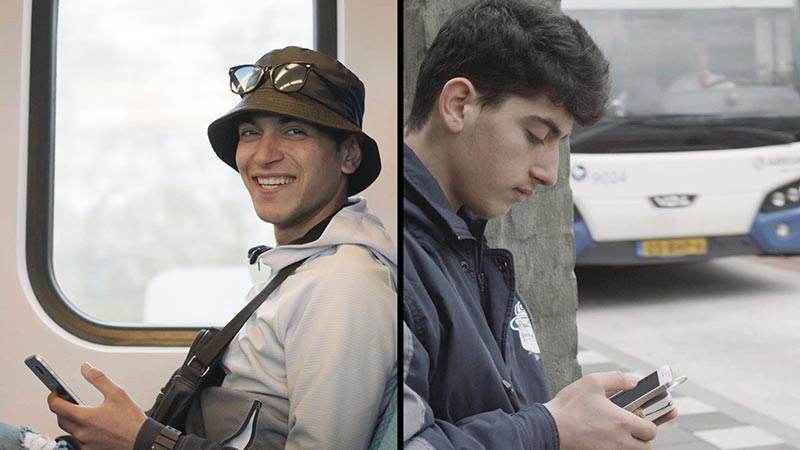 Still of the split screen used to follow the brothers’ journey.
Photo courtesy of Eefje Blankevoort and Els van Driel.

FSFF: What advice would you give to your past self and to the younger generation about finding the freedom to create and speak?

EB and EvD: Follow your heart to do so and always stay connected to the feeling of what is the right thing to do? Go for justice. And keep on finding inspiration in others who stood up for freedom. Such as Nelson Mandela. He said: “Freedom is not just throwing off chains but living in a way that respects and enhances the freedom of others.”

FSFF: Any next projects you are currently working on? / What do you see or hope for in your future?

EB and EvD: First we want to finish our project Shadow Game. After the feature length film, of which Jano and Shiro are also protagonists, we decided to make more follow up short docs. So we have Jano and Shiro’s story but also that of Mohammed and Durrab from Shadow Game film. Now we are filming the latest developments around SK, an Afghani boy from the film. He is currently in Belgium and a lot is happening in his mind: after arriving he calls the procedures he is in: ‘the mindgame’. So we will release this film in the spring/summer of 2022. And we are campaigning with the boys from the film to get them into European Parliament to raise their voices around children’s rights in our campaign ‘protect children on the move’. We drafted a manifesto here, which we hope a lot of people will sign: https://www.change.org/p/protect-children-on-the-move 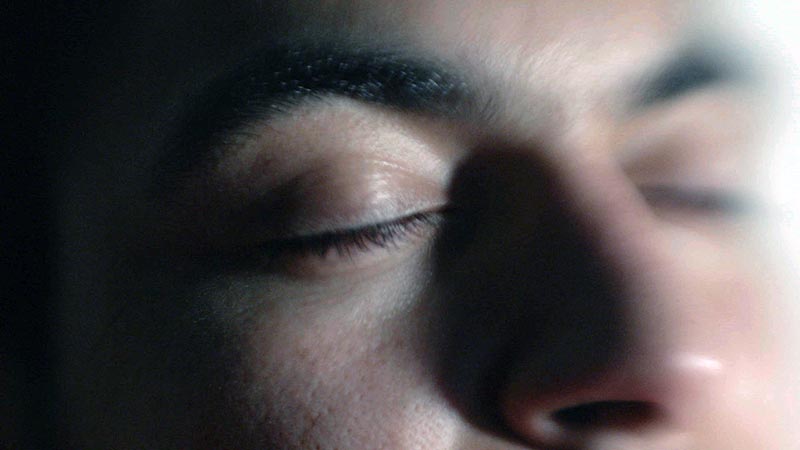 FSFF: Finally, a question we always like to ask: how important is it that everyone has the power of free speech?

EB and EvD: [To] have the freedom to say what you want is the most important pillar – for a journalist- and so it is for a healthy democracy. We noticed that the boys from Shadow Game, like Jano and Shiro, came from brutal dictatorship countries like Syria. They were always afraid to speak out. This is changing now. Through the film and their presence in the Netherlands they are finding their voices in the debate around refugees. It gives them courage and strength to speak out for their peers who are still on the move. This is amazing and inspiring to see and it gives us as Dutch filmmakers and journalists double inspiration and the duty to go on with our work to tell stories from the shady side of the world and activate people to act when things are not aligned with human rights regulations.

To watch the trailer of Jano & Shiro, a Brothers’ Journey and learn more about the film, check out American INSIGHT’s 2021 Festival Highlights Page.